Morning. It’s Saturday, and I have the aches from football last night. I honestly think there should be chewable morphine made available over the counter for men of a certain age who play 5-a-side on a Friday night to make their Saturday mornings more manageable. Just a little chomp here, a sneaky crunch there, and […] The post Saturday round-up: Elneny, Aubameyang, Infantino appeared first on Arseblog ... an Arsenal blog. 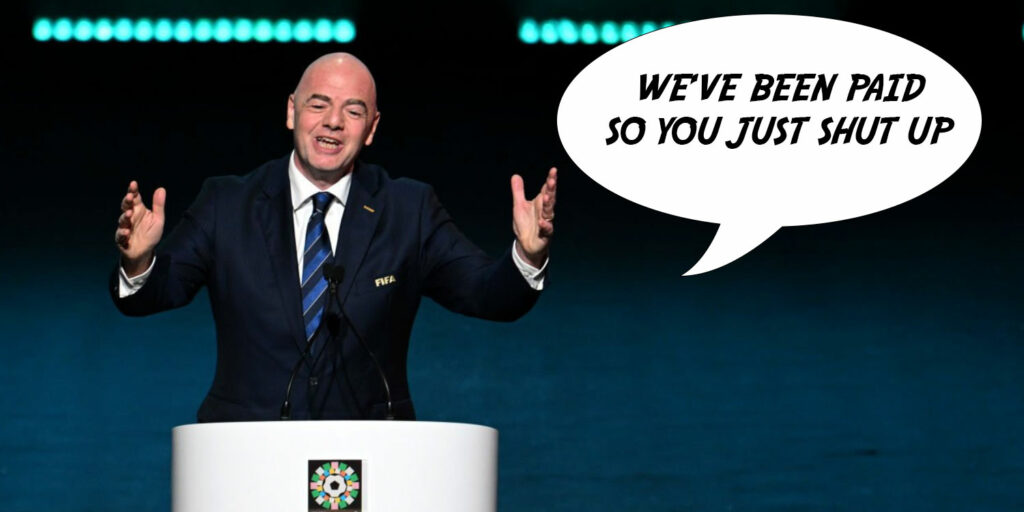 Morning. It’s Saturday, and I have the aches from football last night. I honestly think there should be chewable morphine made available over the counter for men of a certain age who play 5-a-side on a Friday night to make their Saturday mornings more manageable. Just a little chomp here, a sneaky crunch there, and bang, everything’s all right. I can float through the day of a cloud of synthetic poppy.

Still, I know what will get people in the mood today. How about a lengthy piece about Mikel Arteta and Pierre-Emerick Aubameyang? I bet nobody’s done that yet. A truly in-depth, behind the scenes look at a situation that nobody knows the truth of because even with a documentary film crew following everyone around for a year, we still only got a surface level view of what happened.

That said, I did like Mohamed Elneny speaking about it after the game the other night. Quizzed on facing the former captain this weekend and his reaction to what was in the All Or Nothing hoo-ha, he said:

“Everyone is scared with their position because this happened to Aubameyang! Of course, if anyone is not the captain of the team, does a small mistake, they are going to have the same problem, and no one needs that problem.

“Everyone looked at themselves because Mikel did that to the captain of the team. What is he going to do with another player?”

A manager has to have some authority, no question, but part of that is showing that nobody is above the rules. We all know that in football, there are players who are given leeway and licence by managers and coaches, because what they produce outweighs any issues that their behaviour causes. But if that player isn’t doing it on the pitch, that special treatment, or the manager’s willingness to look the other way, tends to disappear.

Aubameyang was really good for Arsenal, and while it didn’t happen overnight, we got to a point where he really wasn’t. Then he left, he went to Barcelona, and now – for his sins – he’s at Chelsea. We have Gabriel Jesus, and I’m much happier with him than I was with late stage Aubameyang. I suspect I’m far from alone in that regard. Even if you were an Aubameyang fan and didn’t like how that whole thing went down, it’s hard to argue against the idea that we’re in better shape now.

I won’t say good luck to Aubameyang because he’s obviously a Chelsea player now and I wish everyone involved with that club the worst at all times forever and ever. I hope a gigantic sinkhole swallows Stamford Bridge and the cost of relocation and building a new stadium bankrupts them. I hope all their replica kits are made with a rogue fibre that causes relentlessly itchy hives to anyone who comes in contact with one. I hope John Terry invests all his money in a kind of digital Ponzi scheme which then … oh …

Anyway, we’ll have more on the Chelsea game in our Patreon preview podcast which drops a bit later on this morning. No doubt there’ll be some Aubameyang talk, but other talk which is better talk. Join us for that.

A quick word on the shameless letter sent by FIFA’s autocratic talking thumb, Gianni Infantino, in which he says ahead of the World Cup taking place in Qatar:

Please do not allow football to be dragged into every ideological or political battle that exists.

Which is essentially telling everyone – from players to federations to fans – to shut up and not address important issues. The idea that, for example, someone’s sexuality is an ideology and not simply their reality is both blinkered and horribly offensive. It’s political in the sense that the World Cup is taking place in a country where homosexuality is illegal, and while FIFA and Qatar may have brokered an uneasy truce in that regard, we have yet to see how that will play out when the tournament begins. There must be some trepidation among gay fans regardless of wishy-washy assurances that everything will be fine.

That Qatar are paying groups of fans to be cheerleaders doesn’t help much, does it? Football fan ‘influencer’ culture. Grotty, and shame on all those who took the money to have a nice time and look the other way while such injustice exists. FIFA have sold their soul, we all know that. Now some fans who should know better have too, and Qatar had the gold to pay the price.

I think everyone understands that there is a measure of moral compromise involved in football these days. Whether it’s your clubs ownership or sponsors or player behaviour or something else, most of us have to live with some kind of cognitive dissonance.

What I would say is this though: I think that from our comfortable perspective, there’s a moral high ground that is potentially a bit dangerous. It’s not as if our own societies are perfect. It’s not as if there aren’t ideological and political issues on our own doorsteps every day. Homelessness. Corruption. The treatment of refugees and downtrodden people. Health services at breaking point. Education. LGBTQ+ fairness. Women’s reproductive rights. The list goes on.

While the focus is very firmly on Qatar, FIFA, and it’s obviously vital to raise and address issues in that regard, it’s important not to lose sight of it on a local basis, and to expend some of that energy closer to home as well. If these are things you care about because of a football tournament, you should care about them every day too. Let’s not forget about what happens every day where we are, and the people who could use our help by simply standing up and speaking out the way people are with this World Cup.

Right, I’ll put my tiny soapbox away for this morning. Have a great Saturday.

World Cup tactical trends: Why having the ball didn't mean...

Ben White sends three-word message as he returns to Arsenal...

According to Kicker, Stuttgart is interested in Josuha Guilavogui as they look for...

Like a lot of folks in the field of sport medicine I am, at heart, a lover of sport. ...