Messi, Qatar, and the fulfilment of a football fairytale

[…] The post Messi, Qatar, and the fulfilment of a football fairytale first appeared on The Football Faithful. 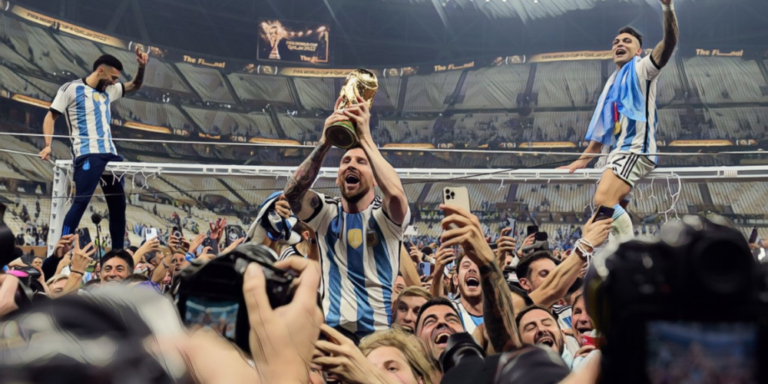 Before a ball had been kicked in Qatar, Lionel Messi’s tale was already special. As the dust settles on football’s biggest event, Messi’s missing chapter has been completed.

The one omission from his glittering career of greatness is no more and the image of Messi clutching that famous gold trophy will be eternal. What had been the most thrilling final in World Cup memory had its perfect ending.

Each of Argentina’s three triumphs on the world stage have been inspired by individual brilliance. Mario Kempes was the hero on home soil in 1978. Diego Maradona enjoyed God-like status for his role in their 1986 success.

Kempes had called Messi ‘the king without the crown’ this week. On Sunday, he was coronated and took his place among Argentina’s holy trinity.

This was his tournament. It had been a rollercoaster ride, one which began with Argentina arriving in Qatar on a wave of optimism, as Copa America champions and on a 36-game unbeaten run. A shock setback against Saudi Arabia changed confidence to nerves, but successive wins against Mexico, Poland, Australia, the Netherlands, Croatia and France saw Argentina crowned champions.

Messi was there, front and centre of it all. He failed to score in just one game and became the first man to score in each knockout round game of a World Cup. He was there as Argentina navigated the choppy waters of a tempestuous tie with the Dutch. He was there again as Croatia were crushed in the last four. He was there, once more, as the South Americans edged France in a pulsating six-goal final that had the watching world on the edge of their seats.

“The other matches, whatever their own vivid excitements, can only nourish the expectations of the last collision,” he penned. “Earlier days offer sudden death but this is the only one that offers instant immortality.”

Those words are true, but Messi is no mortal and hasn’t been for quite some time. His immortality was achieved long ago, through the countless records and goals. More so in the things less tangible. The moments and feelings he has conjured.

There’s a sense of anticipation whenever the ball arrives in his possession. Many players evoke this, but none quite like Messi. It’s been evident in Qatar, the bated breath of excitement, but has been in stadia across the world for almost two decades. That’s what Messi does and why he should continue to be cherished until he’s no longer around. Sadly, that might not be too far away.

In Qatar, there were glimpses of Messi at his absolute level. The reverse pass to set up Nahuel Molina against the Netherlands was magical, while his bamboozling of Croatia’s Josko Gvardiol was not the first time Messi has made a fool of a talented centre-back.

When he does eventually call time on his career, when the old magic has dimmed just a little, he will hang up the boots that have written legend with no regret. It has been fifteen years since Messi lost his first final with the national side, in what was the start of a turbulent road to this ultimate glory.

Three final defeats – one World Cup and two Copa America – followed in consecutive years between 2014 and 2016, a hat-trick of disappointments that led to a brief, thankfully u-turned, international retirement. Among it has been accusations that Messi is inherently European, such was his early departure across the Atlantic for Barcelona. It was a slight that rankled with Messi, Rosario born and bred, who grew up dreaming of wearing the colours of La Albiceleste.

Those near misses are no longer central in the tale of Messi and Argentina. It might have come later than once expected, but Messi has led his nation to success. Copa America, Finalissima, World Cup. Messi has won them all.

In the coming days tributes just like this will be aimed in Messi’s direction. The most talented footballer of his generation and for some, perhaps even most, the greatest of all time. Writing about Messi during his career has proven both difficult and easy. His game makes it effortless to throw superlatives in his direction, but often even those feel exhausted and inadequate.

This was a World Cup that began with controversy and its issues should not be forgotten. Politics and human rights have been prominent in the narrative, while even the trophy lift – in which Messi was presented with a bisht – ensured the imagery of the 2022 final will always be tied to the first Arab World Cup.

It has proven divisive that FIFA chose this moment, the culmination of Messi’s international career, to cover the colours of his beloved Argentina.

Fortunately for FIFA, and fans across the world, on the pitch this tournament has been a success and concluded in perfect fashion. Messi scored twice in the final and once more in the shootout, earned the Golden Ball, and hoisted the World Cup trophy aloft.

And that was that. The tale of the greatest footballer of all time is not over, but anything added from here will merely represent an addendum to a special sporting story. It is one that will continue to be told for decades to come.

Fairytales don’t often occur in football, but Messi’s long road to this triumph is befitting of such status.

The hours since have seen an outpouring of emotion, a collective sigh of relief from football that the games greatest has achieved it all. There were well wishes from the English, even the Brazilians, as rivalries were cast aside to celebrate Messi. It is the breaking down of tribalistic barriers that perhaps only true genius can achieve.

The post Messi, Qatar, and the fulfilment of a football fairytale first appeared on The Football Faithful.
Read More

Display’s against Chelsea could have cost England star...

San Diego State vs. Middle Tennessee: How to watch the...

Opinion: Chelsea have an absolute gem about to earn senior...

Manchester United 'to face Real Betis on December 10' in...

Four players who were suspended for the World Cup final