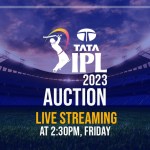 IPL Auction LIVE Streaming: IPL  Mini-Auction – There are now just a few days till the Indian Premier League 2023 Mini Auction. The IPL 2023 Auction will start at 2:30 PM IST on December 23 in Kochi. There are up to 405 players available, but only 87 slots on the ten teams. JioCinema and Star Sports Network will carry the auction live for viewers. Jio customers will have free access to the 2023 IPL Auction. Check out JIO Cinema’s five major plans for streaming the IPL 2023 Auction Live. Follow IPL 2023 Live Updates on InsideSport.IN

SRK MSD IPL: KKR owner Shah Rukh Khan EPIC response to ‘How do you feel when MS Dhoni bats vs KKR’ sets Internet on fire ahead of IPL 2023 Auction – CHECK out

This year’s IPL auction will feature former IPL stars Suresh Raina, Chris Gayle, Eoin Morgan, Anil Kumble, and AB de Villiers. They will all be a part of an expert panel. The expert panel for the auction was confirmed by Jio Cinema in a teaser video that was aired on its official social media accounts last week. Only the names of Suresh Raina, Chris Gayle, and Eoin Morgan are mentioned in the video. Anil Kumble and AB de Villiers will also be on the panel, though.

Three of the best T20 players in the JioCinema expert panel for IPL 2023 auction. pic.twitter.com/QUati5sLnG

For the past several seasons, we have been watching IPL live streaming on Hotstar, but this year’s IPL 2023 auction will be very different. This will be the first IPL auction to be covered by separate broadcast and streaming platforms. The IPL auction will be broadcast by Star Sports, while Jio Cinema will stream it live. Viacom18, a Jio Platforms subsidiary, has mandated digital rights for internet live streaming. To watch the streaming for free on the Jio Cinema App, you must have a Jio sim.

The 2022 IPL auction live stream provided by Jio Cinema and Viacom networks would be much different from previous ones. The Livestream offers a selection of different camera views. The many Live video streams that are available on the OTT allow you to select the IPL Livestream you want to watch.

The IPL auction will be live streamed for free for the first time ever. Just a Jio sim and an internet connection are required. Star Sports channels will broadcast the IPL 2023 mini auction live in India. However, Viacom 18 has the digital rights for IPL 2023 in India and Indian subcontinent. Live streaming of IPL 2023 mini auction will be available on Jio Cimena app for free.

Standard Definition (480p) and High Definition (720p, 1080p) have been used so far for sports broadcasting and streaming . Jio 5G and Viacom18 will alter that. The IPL 2023 auction in India will be streamed in 4K for the first time ever (Ultra-High-Definition). One can watch live sports in 4K on a mobile device, a 4K TV, a tablet, or a screen with that quality.

Swarovski will design the new RLCS trophies for Rocket...