The Kangaroos have qualifed for their 15th straight Rugby League World Cup Final after coming from behind to defeat New Zealand in an enthralling encounter at Elland Road.

LEEDS – The Kangaroos have qualifed for their 15th straight Rugby League World Cup Final after coming from behind to defeat New Zealand in an enthralling encounter at Elland Road.

It was a classic befitting the semi-final of a World Cup, with extreme physicality and skill, settled by a charge from Cam Murray that was all heart.

In the end, the Kangaroos had the individual quality to make the difference, though the margins were razor-thin and the Kiwis had two tries taken off – correctly – by the video referee.

This was an astoundingly high quality game of football, with New Zealand hitting every note that they needed to discomfort Australia and the Kangaroos having the required individual talent to combat it. 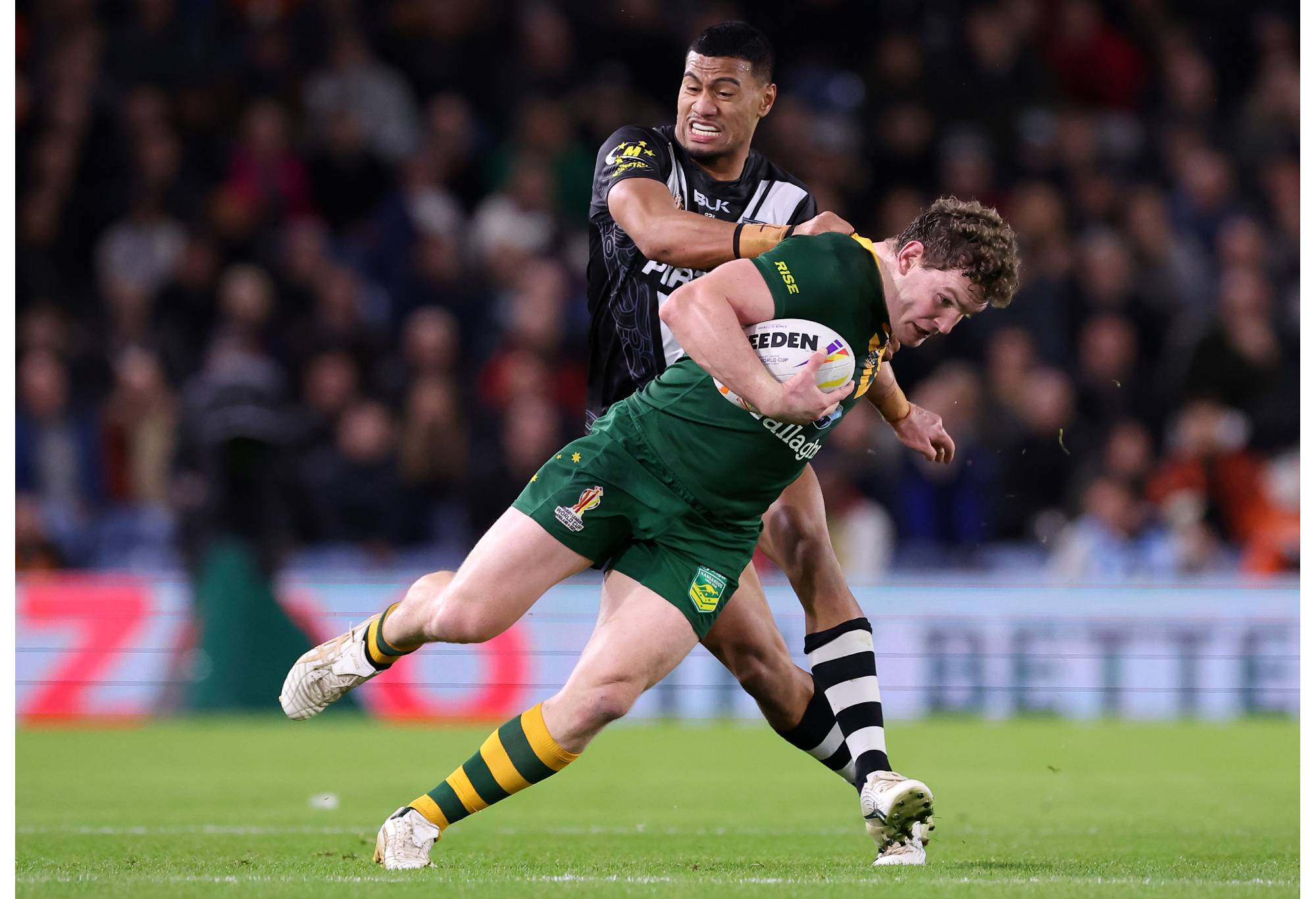 They looked best when they circumvented the middle, especially to the right edge of Val Holmes and Jack Wighton. Though the Kangaroos have favoured the other side more readily in this tournament, they targeted Chanze Nicoll-Klokstad ruthlessly and got rewards.

The depth available to Mal Meninga proved critical. Tino Fa’asuamaleaui and Murray were among the game’s best after entering from the bench and took advantage when the Kiwis inevitably tired.

The Panthers’ combination of Isaah Yeo and Liam Martin, who received the stadium man of the match, were also vital with both proving their worth in defence in a game where the Australian middle was second best.

For the Kiwis to stand a chance, they needed to dominate physically and free their spine, which they were more than capable of doing. Their power game was to the fore, outrunning Australia in metres and recording four times as many offloads.

Off the back of it, Dylan Brown and Jahrome Hughes buzzed, with Brown a bigger threat with the boot than he is usually required to be at club level, while from the back, Joey Manu offered both excellent yardage carries and crucial interventions in attack.

Early on, the Kiwis were clearly imbued with a sense of adventure. They offloaded readily and produced a superb left shift that got Ronaldo Mulitalo away. By the time they took the lead, it was no surprise.

The try was a product of their best three parts combining: Brown dropped a kick a yard from the line, Manu rose highest and tapped down for Hughes to touch down.

Going behind sparked Australia into life. For the first time, they threw the ball wide, with Holmes able to get outside the Kiwis defence.

Though he slipped and was tackled, the line remained scattered and allowed Ben Hunt to kick unimpeded, from which he found Josh Addo-Carr in open space. It was a brutal reminder of the quality available to the Kangaroos.

Jordan Rapana nudged New Zealand back in front with a penalty goal, but the lead would not last long. Australia, emboldened by their previous right shift, went there again and made bulk metres.

Wighton left Nicoll-Klokstad on his backside and, despite a miracle tackle from Manu, was able to get the ball away behind his own head to give Holmes a simple task. 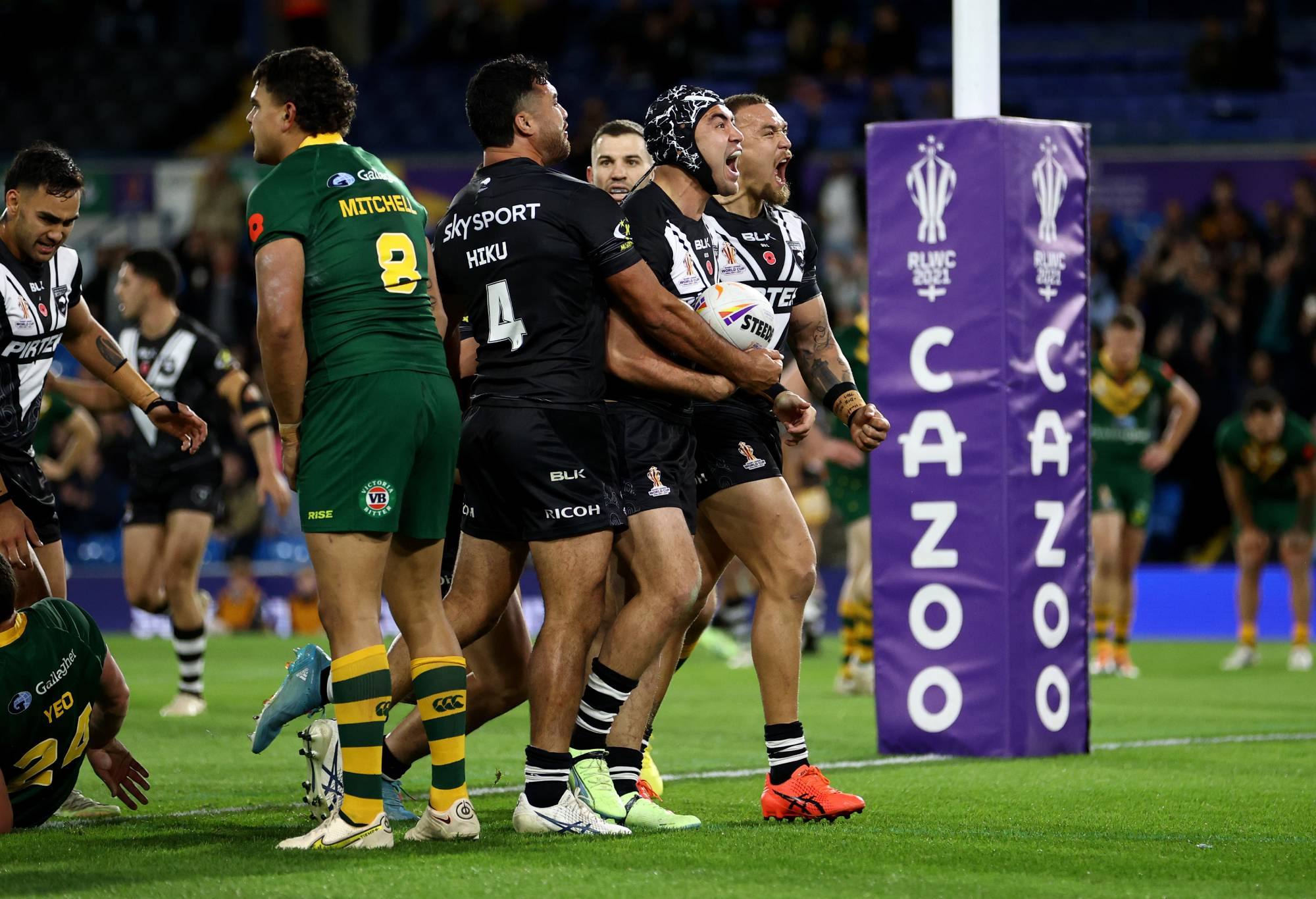 The Kiwis had the perfect response before the break. Nelson Asofa-Solomona entered with a bang, smashing Pat Carrigan on his first carry, and with the defence backpedalling, Brown freed Mulitalo for the third time on the wing before backing up to put his side back in front.

There might have been more at the start of the second half, with Peta Hiku losing a try to the video ref, and they would pay the cost, with Murray scoring far too easily on a simple one-up carry beneath the posts.

With 15 to play, the Kiwis lost Mulitalo to a leg injury, but the fight continued. Rapana made a huge break, from which Hughes kick and Hiku attempted to ground, but again missed. It would be the final chance for New Zealand, who slumped to the turf as the siren blew.

It’s an All-Star 5 led by in-form players as the overall appearances leader Jeremiah...