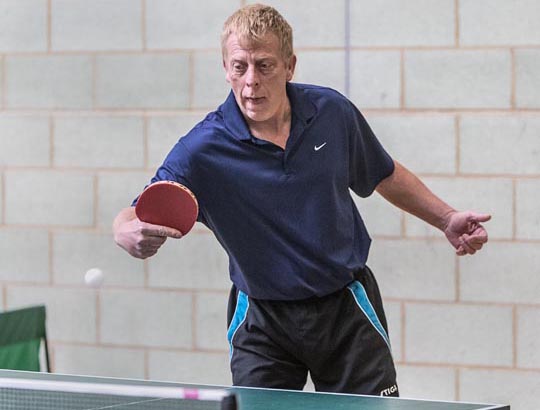 Brotherhood C of Division Two took a big step in their quest for Cup glory when they defeated top-flight Walton C 5-3 in their Group D match of the Clacton & District League’s Handicap Cup.

This second group win should be sufficient to take them through to the knockout stages, but their victory against Walton was by no means easy, the Brotherhood trio of Mark Boyland, Mark Beckham and Paul Metcalf (pictured above, photo by Roger Hance) having to take four consecutive matches after trailing 3-1 at the half-way point of the contest.

Walton C could still gain the second automatic place but club-mates Walton A are also still in the hunt, this week beating Lawford 5-4 in a keenly-fought encounter. Kevin James was Walton’s most successful player, winning two singles and one doubles, his 3-2 (3-11, 11-8, 2-11, 13-11, 11-9) win (on -8) against Ian Sherwood (+2) in match seven proving critical.

Brotherhood B chalked up their second win in Group A, defeating Nomads Lions 5-2. The Lions made a good start, leading 2-1 at one stage, Ethan Lloyd and Jason Lloyd (-6) winning the opening doubles 13-11 in the decider against Barry Allen and Tricia Salter (+6). But Brotherhood took four consecutive matches to clinch the victory 5-2 and a place in the knockout round.

Nomads Panthers conceded their match against Walton D, which means that the Walton side has qualified without breaking a sweat, this after defeating a two-player Nomads Lions in their first match. It also means the Panthers are almost certain to miss out on an opportunity to retain their position as Cup-holders.

Windsor Magpies enjoyed a welcome 5-2 success against Windsor Kestrels. Three of their wins finished close in five – John Plummer and Malcolm Caley (+1) defeating Debra Found and Allen Denyer (-1) 11-9 in the decider, Caley and Dave Sweetland (+1) defeating Denyer and Peter Aumord (-3) by the same score, with Sweetland (0) scraping past Found (0) 13-11 in the decider.

Windsor Buzzards are almost guaranteed qualification from Group C after defeating Brotherhood D 5-2, Dave Martin unbeaten on the night in his two singles and one doubles.

Brotherhood D’s chances of automatic qualification now depend on their final match against Windsor Penguins in a winner-takes-all encounter, this after the Penguins were handed a 5-0 win by Nomads Ocelots who were unable to fulfil their scheduled fixture.

The Brotherhood F v Walton E match in Group E proved a see-saw encounter, with Brotherhood leading 3-1, losing three matches which all went to a decider to go down 4-3, before winning the final two matches to take the tie 5-4. All credit to Tom Bryden, Joe Sherwin and JJ Barry for their fighting qualities which should ensure they go through to the knockout stage.

A two-player Nomads Jaguars’ side fielding a guest nearly pulled off a sensational victory in their match against Nomads Lynx. Chris Petrou and Kevin Hume each took two singles in the first four legitimate matches to level the score at 4-all. But they fell at the final hurdle, Pam Cousins and Ann Peart (+2) beating Petrou and Hume (-8) (7-11, 10-12, 11-3, 11-9, 11-5) in the deciding doubles.

In what has developed into the tightest of the seven Groups, Windsor Hawks kept their qualifying hopes alive with a 5-1 victory over Walton A in Group F. The match was closer than the scoreline suggests, the Hawks winning the three matches which went to five. Andy Vincent (0) beat Pete Burrows (0) 11-8 in the decider, Ian Fielder (+1) beat Gavin Price (-5) 11-3 in the decider, with Hawks’ skipper John Barton (+2) settling matters with a 13-11 in the fifth win against Burrows (-6).

And with Windsor Eagles breezing past a two-player Brotherhood A 5-0, all four teams in the Group are locked together on three points. It means that the winners of the final Group matches – Eagles v Hawks and Brotherhood B v Walton B – will definitely go through to the knockout stage, with the losing teams left hoping to finish as one of the best third-placed sides.

There are just three teams in Group G and the one match here saw Nomads Bobcats chalk up a 5-2 win against a Nomads Leopards’ side fielding a guest. James Horsler (+2) beat Dominic Joannou (-8) in the deciding encounter.

However, the Leopards should still qualify for the next round, with Windsor Merlins having to defeat the Bobcats by a large margin to stand a chance of taking their place in the round of 16.

* The League has received sad news about a former player, John Houghton, who died last month. John played in the League for the Nomads Club for a dozen or so years up to 2017, mainly for the Pumas but latterly for the Lynx and Wildcats.

A solid Third Division performer who usually averaged about 50 per cent, John enjoyed the competitiveness of table tennis, although it was the exercise, company and friendship which mattered just as much. Never one to seek honours, John did achieve one moment of success when, in his last playing season, he was a member of the Nomads Wildcats side which finished as Division Three runners-up.

We will remember John as a quiet, decent and, above all, friendly man, and we send our sincere condolences to his family.

Athlete Panel to give Pathway players a voice

The MENTAL TRAINING FOR TENNIS (ebook down

The Ottawa Senators are heating up. Despite the injuries they have had to endure,...